Stairs are a very essential part of multistory buildings. It can be defined as a series set of steps used for climbing one floor to another of a building. It is suitable for walking up a small vertical distance. There are many types of stairs used in buildings and structures. 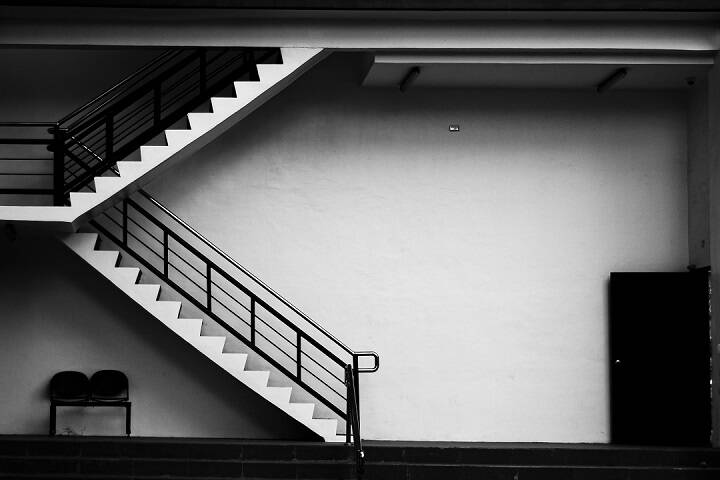 To study on staircase one must recognize its components. There are various components or parts of a staircase that have their own functions. Staircases may be in all shapes and arrangements to suit different properties but the main parts which go up to make any staircases are fairly common. In this article, all modern stair parts are discussed also.

Following are the various components of a staircase:

A step is composed of two parts.

Brief details of these two parts of the steps are discussed below.

Tread is a scrap of the stairway that is stepped in. It is the top or horizontal surface to press beneath the feet. It is trodden on while climbing or descending the staircase. It is constructed to the same thickness as other flooring. There is always one fewer tread than risers in a staircase. The overall horizontal distance of the stairs will be the number of threads added together.

The material of the tread can be timber, steel, glass, acrylic, panel product, or tiling.

Shape and Size of Tread

In a standard straight run of stairs in a residence, the minimum depth is 10 inches.

The riser is the vertical portion between each tread on the stair. Not all stairs have risers. The rise-less steps are known as the open thread. Open riser stairs have grown in popularity in recent years. The closed tread stair has risers included. The vertical board forms the face of the step and also forms the space between one step and the next.

It is a vertical component where the material can be timber, steel, glass, acrylic, or panel production tiling.

Shape and Size of Riser

Stair riser heights shall be 7 inches (178mm) maximum and 4 inches (102mm) minimum. The height shall be measured vertically between the nosings of adjacent treads. The greatest riser height within any flight of stairs shall not exceed the smallest by more than 3/8 and the rise shall not be less than 11 inches. Check the local building codes on stair riser height if you are building your own staircase.

Nosing is the horizontal, protruding edge of a stair where most foot traffic occurs. Mostly, it is the half-rounded molding fixed to the ends of the threads exposed in a half which covers where the balusters fit into the treads. Nosing is the edge of the tread projecting beyond the face of the riser and the face of a cut string. This is where the thread above a riser overhangs it. In some cases, tread might not have a nosing

These parts can be manufactured from a variety of materials including Aluminum, vinyl, and wood.

It is known as Starting footstep. When stairs are unbolted on one or both sides, the initial step above the lower floor may be wilder than the other steps and rounded. A double bullnose refers to a staircase that is not against a wall and therefore there is a bullnose at both ends of the starting step.

It is also known as a stringer or stringer board. There are structural supports that run along either side of the staircase, though the treads may be supported in many other ways. The stringers are sometimes notched so that the risers and treads fit into them.

There are several notable types of string (The stringer is usually 220mm wide and 32mm thick. The length will depend on the rise and go).

Winders are the steps that are narrower on one side than the other. A series of winders form a circular or spiral stairway. Stairway winders or turns involve triangular treads to complete the turn. When three steps are used to turn a 90-degree corner, the middle step is called a kite winder as a kite double winder. The Toronto Home inspection shows that only one set of winders should be allowed in a staircase and the dimensions should be tripping hazards.

Winders must be in a room with the proper definition. You cannot create winders in an area composed of only 2 corner walls. If this configuration is needed, enclose the area in with invisible walls so that a room area is defined.

A balustrade is a collective name for the complete assembly of handrails, base rails, newels, spindles, infill, and newer caps.

The term "Handrail" is sometimes used to mean just the banister or sometimes just the balusters. A handrail is a rail that is designed to be grasped by the hand to provide stability or support. It is also known as a railing or banister. They are typically supported by posts or mounted directly to walls. There is often a railing on both sides, sometimes only on one side or not at all, on a wide staircase, there is sometimes also one in the middle or even more. The handrails up the side or sides of a stairway and, as an extension, along with the edge of a landing.

The material of a handrail can be stainless steel, cast iron, or aluminum.

The newel is a sturdy vertical post at the end of the turn of a banister. Newel is also known as a central pole or support column. Since it is a structural component, it extends below the floor and subfloor to the bottom of the floor joists and is bolted right to the floor joist. There are four kinds of newel stair posts which are- standard, landing, pin-top, and stabilizer newel posts. Visually it looks like half the newel is embedded in the wall. For open landings, a newel may be extended below the landing for a decorative newel drop.

A volute is a handrail end component for the curtail or bullnose footsteps that curve inward like a spiral. It is said to be left or right-handed depending on which side of the handrail is as one faces up the stairs. The detail is like a scroll at the entry of a handrail, sometimes called a monkey's tail. Available with an up-ramp, it is installed at the bottom of the side on a starting step, extending out from the side of the staircase. However, it has the most difficult installation process you can find in a staircase.

The baluster is a term that holds up the handrail. It is a vertical member which posts in the space under the banister to the treads or floor( on the side of a landing). Sometimes. it is simply called a guard or spindle.

It is made of stone or wood and sometimes of metal which can be plain or decorative.

Instead of a complete spiral volute, a turnout is a quarter turn rounded end to the handrail. It is a stylish way to start a stairway. They are less dramatic than volutes but still attractive. Turnout is of two types- left and right-hand turnout. If you are facing the bottom of the stairway, a right turnout would be on the right side of the stairway and a left turnout would be on the left side. A turnout must have a pin-top newel post below.

It is available in a variety of woods like hard maple, hickory, alder, red oak, poplar, American cherry, etc. It is made of clear wood with no knots or blemishes.

A gooseneck is a vertical handrail that joins a sloped handrail to a higher handrail on the balcony or landing. It is the part of the stair hand railing. Gooseneck= Vertical turn + Up-ramp. Goosenecks come in a variety of shapes and sizes. Don't purchase a gooseneck that doesn't match your handrail.

Where the handrail terminates in the wall and a half-newel is not used, it may be trimmed by a rosette. It is an optional decorative wood stair part. While they are more of an ornamental feature, the process of attaching a handrail to a wall is made easier by using them. If your balustrade is a traditional style, then rosettes will add an additional piece of elegant detail. However, if you prefer a cleaner more contemporary, you should probably consider not adding a rosette.

The word easing refers to any type of hand railing change in direction. Wall handrails are mounted directly onto the wall with wall brackets. At the bottom of the stairs, such railings flare to a horizontal railing and the horizontal portion is called a starting rising. At the top of the stairs, the horizontal portion of the railing is called - over easing. Up easing is an element of a handrail that allows changing the direction of a handrail from angular to vertical.

A final is a decorative cap to the top of a newel post, particularly at the end of the balustrade.

The fillet is a decorative filler placed on the floor between balusters on a balcony railing.

Flutes are decorative vertical grooves sometimes routed into the wood surface of the spindle of newel posts.