Concrete is the most familiar building element. The densest and strongest concrete is that in which cement paste fills the voids with the sand and the resulting mortar fills the voids in the coarse aggregate. Every grain of sand should be entirely coated with cement. Before the invention of the mixing machine, the entire mixing process used to be done by hand, shovel, shallow box. But now due to the high demand in construction, different types of mechanical procedures and machines are used for mixing. The concrete mixer was invented by Gebhardt Jaeger who was an industrialist at Columbus, Ohio.

In this article definitions and different types of concrete mixer machines are discussed fully.

What is a Concrete Mixer?

A concrete mixer is a machine for making a homogeneous combination of cement, aggregate (sand or gravel), admixtures, and water. The machine setup is composed of mixing drums, feeding devices, unloading mechanisms, water supply systems, prime mover, and transmission mechanisms. The machine basically promotes the collision between particles and the development of dispersion. Usually, this machine has three basic units: Feeding unit, Mixing unit, Discharge Unit.

As technology has changed, the basic mixer design has also evolved. Concrete mixers can be divided into general mixers and forced mixers. Nowadays, twin shaft mixers, vertical axis mixers, and drum mixers are the most commonly used mixing machines.

The followings are the types of concrete mixing machines.

A brief description of these types of mixture machines is given below. 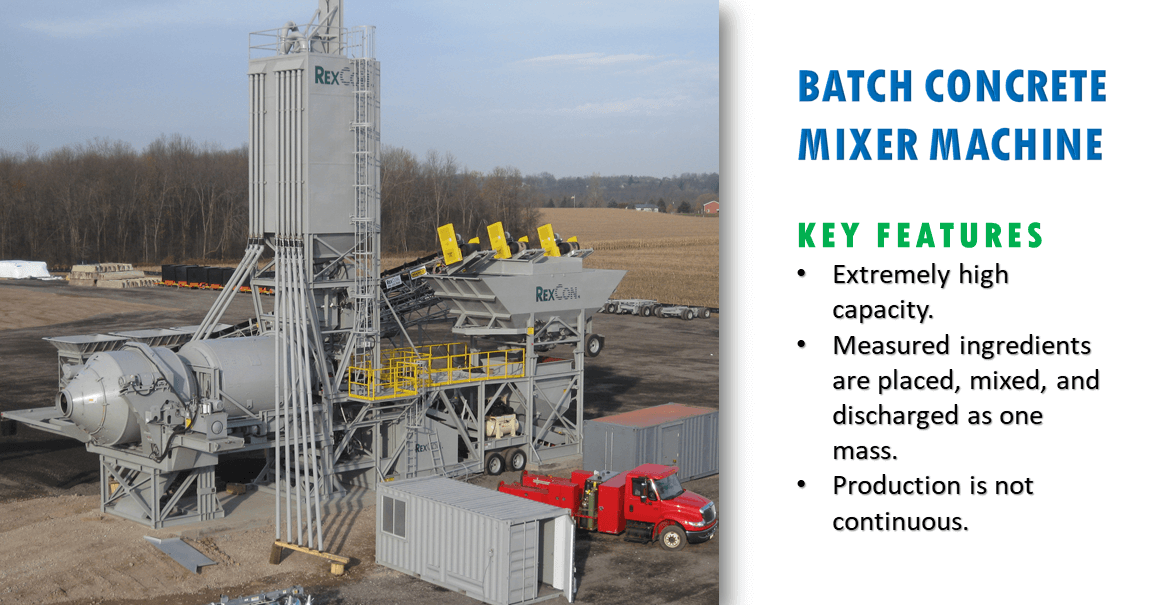 Batch mixers are those into which measured ingredients are placed, mixed, and discharged as one mass. This is in contrast to a continuous mixer, where materials are fed into the device continually, creating an ongoing supply of the product.

Continuous mixers are those into which ingredients are fed continuously and discharge occurs as a steady stream. The loading of materials is done continuously by screw feeders.

Self-loading mixers are those which can automatically produce and transport concrete on-site.

Rotary mixers are not allowed to tilt but use drum rotation about its horizontal axis for discharging.

The tilting type mixer is a mixer with the rotating drum to discharge the concrete.

Forced mixers are specially for hard concrete, lightweight aggregate, and liquid concrete. This is specially used in the concrete batching plant. The machine is specially designed to blend gravel and resin evenly and consistently.