A pitched roof is a roof comprising a sloping surface or surfaces with an angle of usually over 20 degrees. It is a bi-fold, bi-planer roof with a ridge at its highest point. To be more specific – a pitched roof requires a pitch of more than 10 degrees or a roof with two slopes that meet at a central ridge.

Pitched roofs offer a more classical appearance. They remain the most common and efficient solution in wet and cold weathers to ensure maximum protection.

Followings are the major parts of pitched roofs. 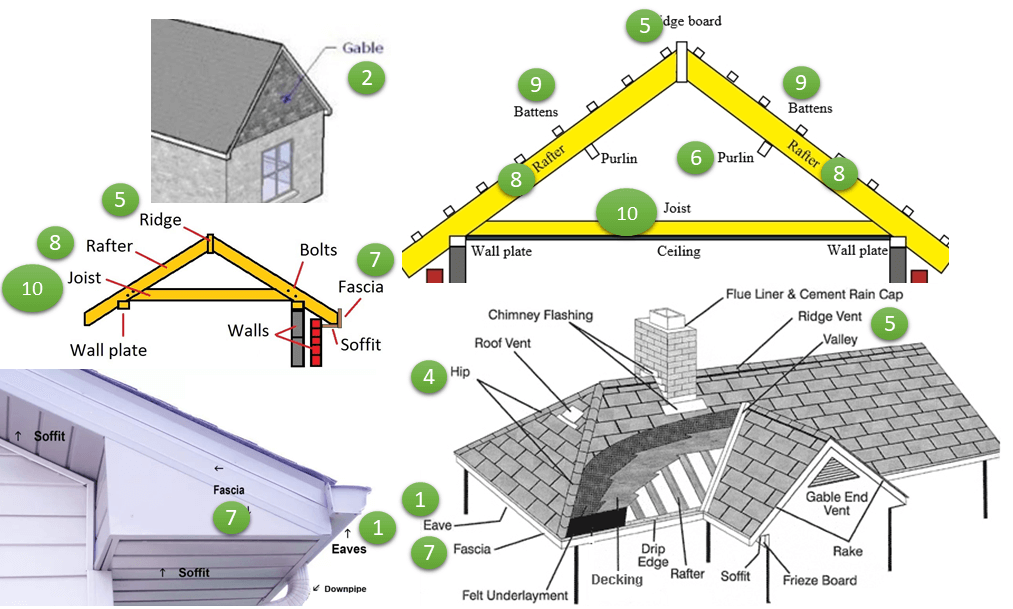 Description of these parts of pitched roofs is given below.

In the roof, the lower portion of the inclined roof which is projecting beyond the outer face of the wall. The main function of eaves is to rainwater to pour from the roof directly on the exterior wall. I also give protection from sunlight. Sometimes eaves are highly decorated to increase architectural beauty.

The Triangular upper part of the wall at the end of a ridge roof.

A strip of impervious material, usually metal used to exclude water from the junction between a roof covering and another part of the structure.

Flashings are provided to prevent moisture from entering the wall and roof through joints in copings, parapet wall, and other penetrations through the roof plane.

The outer angle (more than 180 degrees) formed by the inclined ridge between two intersecting roof slopes.

The horizontal intersection at the apex of the two rising roof surfaces inclined in opposite directions.

These are horizontal members laid on principal rafters on wall-to-wall to support common rafter of a roof when the span is large. Purlins are made from wood or steel.

The top surfaces of the purlins shall be uniform and plane. They shall be painted before fixing on top.

This is wooden board fixed to the feet of the common rafter at eaves. The ends of the lower-most roof covering material rest upon it.

Rafter is a structural component of a pitched roof. Typically it starts from roof support (column or wall) to ridge or hip. Multiple rafters are used side by side with equal spacing to support the purlin. In typical home construction, wooden rafters are used. For large industrial of commercial sheds, steel rafters are used.

These are thin strips of wood which are fixed on the common rafters or on the top of ceiling boards to support the roofing materials such as tiles, sheets, etc. Batten could be also made of metal or plastic.

Followings are the type of pitched roof

Brief descriptions of these pitched roof types are given below.