Rocks are very much known for their rigid nature. Nature is so iconic and famous that people often define their level of determination by using the word ‘Rock’-solid or ‘Rock’-hard. Contrary to this, we all should know that rocks too change. They change in property. For this, a high amount of heat and pressure is required. The rate of change in these two factors plays an important role. It occurs under a cycle known as the Rock Cycle.

“Rock cycle is the process that completely portrays the complex and interconnected transformation of rock from one category to another.” 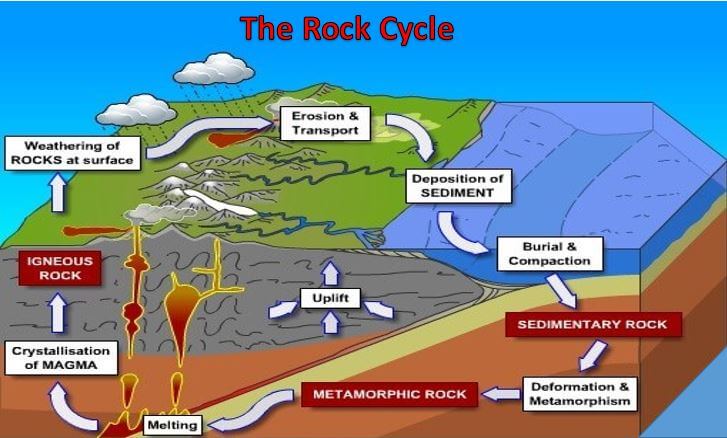 The rock cycle diagram clearly shows all the steps, components of the rock cycle including the end results and the movement of the process.

If the diagram does not make sense, a simple explanation of all the steps at play and their end results is given below-

Steps of the Rock Cycle

Simply put, weathering is a process of breaking down rocks into smaller and smaller particles without any transporting agents at play. Factors like temperature extremities, biological involvement of nature and water plays the main role.

It can be broken down into chemical, physical and biological influencing agents.

Mainly change of temperature rapidly or at extreme levels causes weathering. IT happens when rocks freeze and thaw. Another scenario is when tectonic plates pressure changes suddenly causing fissures. Usually occurs in rocky or mountainous places.

Usually occurs with rainwater trying to react with the rock minerals and create other minerals or chemical compounds. Usually happens in damp and warm places since reactions take place at higher temperatures.

The living world contributes to rock breakdown by-

Erosion too is the natural process of breaking down rocks into sand-like particles. The only difference between weathering to erosion is the presence of agents like water and wind. In the previous one, water was only present as a factor for reactions to take place while in erosion, it acts as a transporting agent too.

Sediment is the constant deposition or settling down of small particles of sand, pebbles, etc. that is broken down from rocks. It is usually done by-

The next step to the process of sedimentation is burial and Compaction. The process is very simple. Once the sand particles are sedimented, they create layers which are soon covered by another layer of new sediments and the process goes on. This gives rise to pressure on the sedimented layers below. Meanwhile, the minerals in the water act as a slow cohesive agent between the particles. Thus, soft layers turn into solid rocks with minerals inside.

Magma is basically lava that remains dormant inside the volcanoes. Magma is the liquid form of rocks under great pressure and temperature due to heat from the earth core. Magma can be both sticky or less viscous. It depends on factors like temperature and amount of dissolved gas.

The less viscous erupt and form porous rocks with fine grains while the more viscous ones form solid rocks with distorted grains.

The reverse of the previous process is melting. As soon as the rocks reach the bottom of the earth, the more the temperature rises and so does the pressure. Soon, they melt and give rise to melted rocks called lava. This, in turn, is erupted only to cool down at the surface to form rocks. Some rocks do not erupt and are forced to change characteristics to give rise to new forms of rock.

The process of forming a crust of earth upwards due to natural forces causing movements in the tectonic plates is called uplifting. This is how mountains rise higher while new islands come up in the middle of the oceans.

The constant pressure and sudden movements put some sedimentary and igneous rocks under great pressure. Such forces can create folds or fissures among the rocks and among all these events, rocks deform to create metamorphic rocks. Deformation basically means folding and faulting of rocks. This is caused by compression and tension.

Igneous rocks are formed from cooled magma and are often either very rigid or porous depending on the place of cooldown. They have minerals in the form of crystals which are often very visible.

Rocks that are formed from constant sedimentation followed by increased pressure and heat. Meanwhile, the minerals act as a cohesive agent and thus, sedimentary rocks are formed. The constructing particles can range from sand to pebbles. The main feature is undoubtedly visible strata and beds.