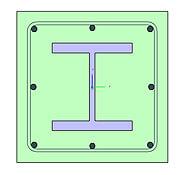 In early 1900's, concrete was used to encase steel columns and beams, and as a filler material for floor systems. In 1907, the first experimental test was carried out by Emperger on built up composite columns under concentric load. Experimental investigations on concrete encased steel composite columns have been conducted by different researchers since long before. Analytical method was developed in early 1900 to investigate the behavior of FEC columns. On the other hand numerical simulations of reinforced concrete structures using finite element method, witnessed a remarkable advancement since 1990. Though, experimental research is costly and time consuming than numerical research, yet the progress in numerical studies are comparatively less. Recently, a nonlinear finite element models investigating the behavior of concentric and eccentric axial load of FEC columns was developed by different researchers. The design of composite columns has been addressed by a large number of design specifications.