The spandrel beam emerges as an important part of frame structures. This article focuses on defining and discussing different aspects of spandrel beams.

What is Spandrel Beam?

In steel or concrete structures, the spandrel beam is the exterior beam that stretches horizontally from one column to another column. These are also known as edge beams.

Spandrel beams are provided on each floor which helps distinguish floor levels in high-rise buildings. These are used to withstand the load of the peripheral walls, in some cases, and also the roof loads of a building because masonry walls generally can not carry self-weight and slab weight entirely. 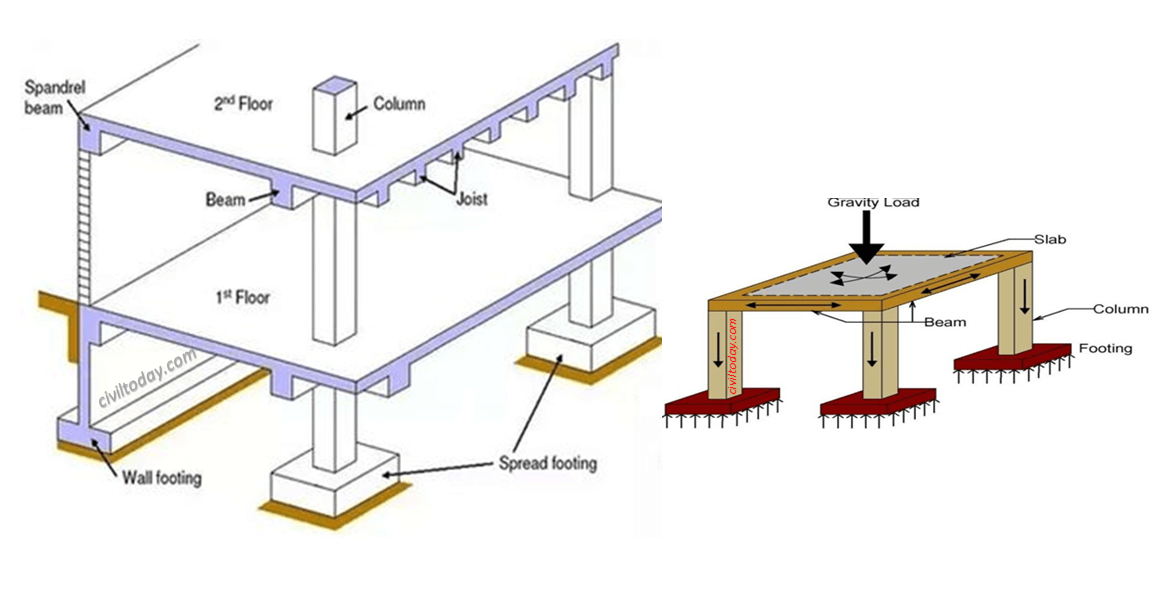 Spandrel beams are designed to transfer external wall load and slab load from slabs to the outer columns. Then the whole load is passed on to the footings through the columns. In RCC structures, these beams undergo axial compression, torsion, bending moment, and shear stresses simultaneously due to their interaction with the floor beams. Slab load is fundamentally transmitted by torsion from beam to columns. Hence, it creates a complex system of load distribution.

The properties of the Spandrel beam highly depend on the floor beam characteristics. Beams connected to flanged floor beams rather than rectangular floor beams produce enhanced capability of resisting torsional stresses. This consequently increases the ultimate load capacity of the high-rise building. The torsional behavior of the Spandrel beam is a significant feature as slab load is fundamentally transmitted from beam to column by torsion. Therefore, the beam requires additional attention to torsional failure while designing. The latest design code followed for this beam is ACI Committee 318, Building Code Requirements for Structural Concrete and Commentary (ACI 318-19).

The following are the key features of the spandrel beam:

There are various types of spandrel beams used in building construction. Some of them are:

Spandrel beams are used in multi-story buildings at each floor level. These are attached to the outer perimeter of floor slabs as a belt to support the floor beams. It also strengthens the connection between the slab and outer columns. On the roofs, the parapets are placed above these beams.

The followings are the advantages of spandrel beam:

The followings are the disadvantages of spandrel beam:

Therefore, a considerable amount of money is spent on the restoration.

What is the difference between a spandrel beam and a girder beam?

Ultimately, the main difference between a spandrel beam and a girder beam is their respective functions. Spandrel beams are typically used for decorative purposes while girder beams are used for functional purposes.