Porous building materials, such as concrete block, are capable of percolation and seepage of water through the building material itself and into the interior portion of the structure. Another source of moisture arises from capillary action and water vapor.

Facts and Ways of Water Intrusion into the Basement [3]:

Water can enter a basement in several ways. The conventional basement consists of three elements. Such as

Underground water and Groundwater is the main source of water which will enter a basement.

If the water table rises above the level of the basement floor water can enter the basement through the side wall. 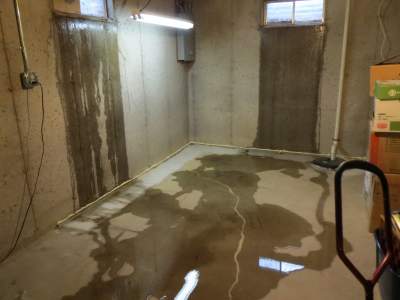 What is Basement Waterproofing?

There have many ways of solving the problem of seepage of water but all the way is not truly efficient because of cost and difficulty of installation.

Some Method and the fact about those methods [2]:

So an efficient method is highly desirable for waterproofing solution. Two methods, which are considered as efficient, are described below.

A sump system in geometry is rectangular. It has two side elements with apertures to exchange the groundwater while blocking debris. In another side element, an adjustable inlet had been provided to connect other elements of a basement waterproofing system to the sump liner. After that in the sump liner, a base configured can be used to provide a built-in stand for the sump pump. The pump stand contains a lip including notches to allow the fallen of debris and collection in a trough around the periphery of the base. The base further provides an underside cavity which accommodates an obstruction in the floor of the sum hole. A removable lid used to facilitate the access of the interior of the sump liner and also contains a breakaway feature to accommodate discharge piping. The sump liner can be oriented into the sump hole to protect the basement foundation from the adverse effect of erosion.