Tacheometry is a branch of angular surveying in which the horizontal and vertical distances are obtained by optical means as opposed to the ordinary process of chain and tape. This is done with the help of two special type of instruments- transit theodolite and stadia rod. On the other hand, other conventional surveying methods like chain surveying or traverse surveying need the surveyor to take a linear measurement on the field by a tape or a chain. These are relatively slower processes and also tiresome.

Tacheometric Surveying is done with the help of Tacheometer and Stadia Rod. To read details of the tacheometric surveying instruments click the following link:

The various methods of the tacheometric survey may be classified as follows:

A brief description of these methods is given below.

As in the field of tacheometric surveying ‘Stadia Method’ is the most widely used procedure so we will discuss the principle behind it. The stadia method follows the principle that in similar isosceles triangles the ratio of the perpendicular to the base is constant.

This constant depends entirely on the angle β. Let, the constant is found to be 100. It means the distance between the staff and the point O will be 100 times the staff intercept.

The Distance-Elevation Formulae For Horizontal Sight

the interval between stadia hairs is given by i=ab,
staff intercept is s,
f is the focal length of the objective,
D is the horizontal distance of the staff from the vertical axis of the instruments.

This is the distance equation. Staff intercept is found by subtracting the reading of the upper and lower stadia reading.

The constant k = f/i is called the multiplying constant or stadia interval factor and the constant (f + d) =C is known as the additive constant of the tacheometer but the latter one is made zero by using an anallatic lens in the instrument.

Determination of Tacheometric Constants on Field 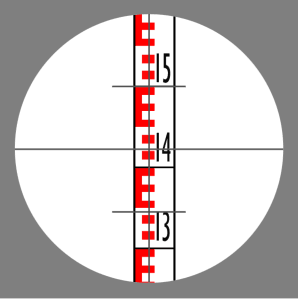 In most cases, we do not really know the value of f (focal length of the objective) so we have to determine the constant k and C on the field with a different approach as below: