Traversing is that type of survey in which a number of connected survey lines form the framework and the directions and lengths of the survey lines are measured with the help of an angle measuring instrument and tape or chain respectively.

There are two types of traverse surveying. They are:

There are several methods of traversing, depending on the instruments used in determining the relative directions of the traverse lines. The following are the principal methods:

Brief descriptions of these traverse surveying methods are given below.

The method in which the whole work is done with chain and tape is called chain traversing. No angle measurement is used and the directions of the lines are fixed entirely by linear measurements Angles fixed by linear or tie measurements are known as chain angles. The method is unsuitable for accurate work and is generally used if an angle measuring instruments such as a compass, sextant or theodolite is available.

In chain and compass traversing, the magnetic bearings of the survey lines are measured by a compass and the lengths of the lines are measured either with a chain or with a tape. The direction of the magnetic meridian is established at each traverse station independently. The method is also known as a tree or loose needle method.

Traversing By Direct Observation Of Angles

In this method, the angles between the lines are directly measured by a theodolite and the magnetic bearing of other lines can be calculated in this method. The angles measured at different stations may be either

An included angle at a station is either of the two angles formed n\by two survey lines meeting there and these angles should be measured clockwise. The method consists simply in measuring each angle directly from a back sight on the preceding station. The angled may also be measured by repetition. The angles measured from the back station may be interior or exterior depending on the direction of progress.

A deflection angle is an angle in which a survey line makes with the prolongation of the preceding line. It is designated as right (R) or left (L) as it is measured clockwise or anti-clockwise from the prolongation of the previous line. This type of traversing is more suitable for the survey of roads, railways, pipe-lines, etc where the survey lines make small deflection angles.

The errors involved in closed traversing are two kinds:

The most satisfactory method of checking the linear measurements consists in chaining each survey line a second time, preferably in the reverse direction on different dates and by different parties. The following are checks for the angular work:

No direct checks of angular measurement are available. So indirect checks can be made. As illustrated in Fig(a) the addition to the observation of bearing of AB at station A, bearing of AD can also be measured., if possible. Similarly, at D, the bearing of DA can be measured and check applied. If the two bearings differ by 180°, the work may be accepted as correct. 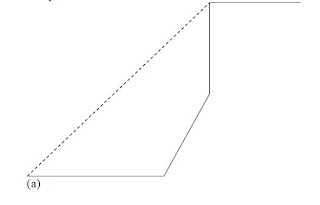 Another method, which furnishes a check when work is plotted is shown as in Fig (b) and consists of reading the bearing to any prominent point P from each of the consecutive stations. The check-in plotting consists in laying off the lines AP, BP, CP, etc and noting whether the lines pass through one point. 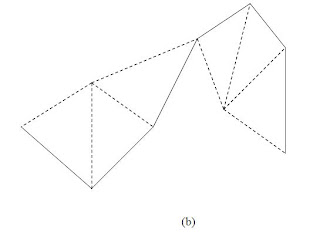 There are two principal methods of traverse survey:

In the figure, the latitude and the departure of the line AB of length l and reduced bearing q are given by 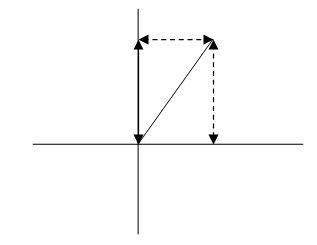